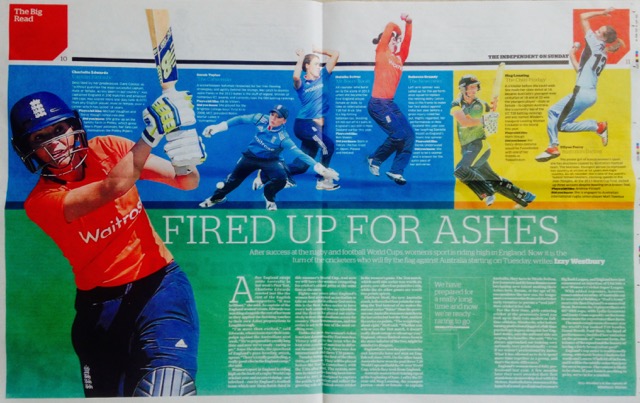 After success at the rugby and football World Cups, women’s sport is riding high in England, now it is the turn of the cricketers who will fly the flag against Australia.After England swept aside Australia in last week’s First Test, Charlotte Edwards reacted just like the rest of the English supporters. “It was brilliant,” she said. As captain of the England women’s team, Edwards was watching alongside the rest of her team as they applied the finishing touches to their own Ashes preparations in Loughborough.

“I’m more than excited,” said Edwards, whose team start their campaign against the Australians next week. “We’ve prepared for a really long time and now we’re ready – raring to go.” Anya Shrubsole, the spearhead of England’s pace-bowling attack, agrees. “There’s a really good feeling, a really good vibe in the England camp,”  she said.

Women’s sport in England is riding high on the back of a rugby World Cup win last year and an entertaining – and televised – run by England’s football team which saw them finish third in this summer’s World Cup. And now we will have the women competing for cricket’s oldest prize at the same time as the men.

Eighty-one years after England’s women first accepted an invitation to take on Australia in a three-Test series, this is the first Ashes series to have every ball covered live on television and the first to be played out exclusively in first-class stadiums across the country. There is momentum, and this series is set to be one of the most exciting ever.

Unlike the men, the women’s Ashes is not just determined by Test matches. Victory will go to the team who do best over a series of matches in different formats: one Test, three one-day internationals and three T20 games.

Tuesday brings the first of the three ODIs, at Taunton. They will be played before the Test in Canterbury, with the T20s after that. The system, now into its third series having been introduced in 2013, is designed to capture the public’s attention and reflect the growing role of limited-overs cricket in the women’s game. The Test match, which until this series was worth six points, now offers four points for a win, while the six other games are worth two points apiece.

Matthew Mott, the new Australia coach, believes that four points for winning the Test instead of six makes the current series “fairer” than the previous one. Australia won more matches in the last series but lost the Test, and lost the series on points. “The weighting’s about right,” Mott said. “Whether you win or lose the Test match, it doesn’t really disadvantage or advantage you.” England, whose limited-overs form is the more inferior of the two, might be minded to disagree.

Australia named their touring squad at the beginning of June. Led by the 23-year-old Meg Lanning, the youngest person – male or female – to captain Australia, they have in Nicole Bolton, Jess Jonassen and Kristen Beams some intriguing new talent making their Ashes bow. Beams, at the age of 30, encapsulates the new era. No longer must a woman retire from cricket in her early twenties to pursue a “real job”. Now cricket is her job.

For the first time, girls entering cricket at the grassroots level can look up to their role models as full-time athletes. Shrubsole, who before turning professional juggled a full-time psychology degree alongside her England duties, says the national side are reaping the benefits. She said: “We’ve always approached our training very seriously, very professionally – even if we weren’t professional by name. What it has allowed us to do is spend more time together as a group, and that’s the main difference.”

England’s women turned fully professional last year. A few months later they were awarded their first standalone sponsorship deal with Kia Motors. Australia have announced the launch of a semi-professional women’s Big Bash League, and England have just announced an injection of £3m into a new Women’s Cricket Super League.

With added exposure, however, comes added scrutiny. If Australia can be accused of fielding a “Dad’s Army” men’s side then England’s women rival them. Between the 14 players there are 807 ODI caps, with Lydia Greenway and Jenny Gunn arguably on the team-sheet more for experience than form.

The most conspicuous absentee was the world’s top ranked T20 bowler, Danni Hazell. Paul Shaw, the head of performance, justified her omission on the grounds of “current form, the balance of the squad and the luxury of having a fairly broad talent pool”.

England’s top order is traditionally strong, with Sarah Taylor, Charlotte Edwards and Lauren Winfield all in form, and it will be the middle order that have the most to prove. The contest is likely to be close. If past form is anything to go by, we’re in for a cracker.

Izzy Westbury is the captain of Middlesex Women

Described by her predecessor, Clare Connor, as “without question the most successful captain, male or female, across sport in our country”. Has captained England in 200 matches and amassed 289 caps. Has scored more one-day runs (8,027) than any English player, male or female, over a career which has lasted 18 years.

Plays a bit like: Michael Vaughan and Steve Waugh rolled into one

Did you know: She grew up on the family farm in Pidley, which grew Maris Piper potatoes; her fans call themselves the Pidley Pipers

A wicketkeeper-batsman renowned for her free-flowing strokeplay and agility behind the stumps. Her catch to dismiss Jodie Fields in the 2013 Ashes is the stuff of legend. Winner of numerous ICC awards and currently tops the ODI batting rankings.

Did you know:  She played for the Brighton College boys’ First XI in 2006; MCC president Robin Marlar called it “outrageous”

All-rounder who burst on to the scene in 2013 when she became the first England player, female or male, to take an international T20 hat-trick. She is a big-hitting batsman too, blasting 65 not out off 63 balls in England’s last ODI in New Zealand earlier this year.

Did you know: Born in Tokyo, she has lived  in Japan, Poland  and Holland

A cricketer before she could walk. She made her state debut at 16, became Australia’s youngest-ever centurion at 18 and at 22 was the youngest player – male or female – to captain Australia. She is currently top of the ICC T20 batting rankings and was named Wisden’s inaugural Leading Woman Cricketer in the World this year.

Did you know: Her fancy-dress costume would be Tweedledee with one of her friends as Tweedledum

The poster girl of Aussie women’s sport, she has also been capped by Australia’s football team, The Matildas. Youngest person to represent her country at cricket at 16 years and eight months. An all-rounder, she is one of the world’s fastest female bowlers, clocking speeds in the mid-70mphs. At the 2013 World Cup final, picked up three wickets despite bowling on a broken foot.

Did you know: She is engaged to Australian international rugby union player Matt Toomua

Left-arm spinner was called up for the performance squad to replace the retiring Holly Colvin. Was in the frame to make her Test debut against India last year before a groin injury ruled her out. Highly regarded, her performances in New Zealand this year saw her leapfrog Danielle Hazell as England’s front-line spinner.

Did you know: She used to be a seamer and is known for the quick pace of her deliveries

• This article was originally published in The Independent on 18 July 2015. To access the original, please click here.