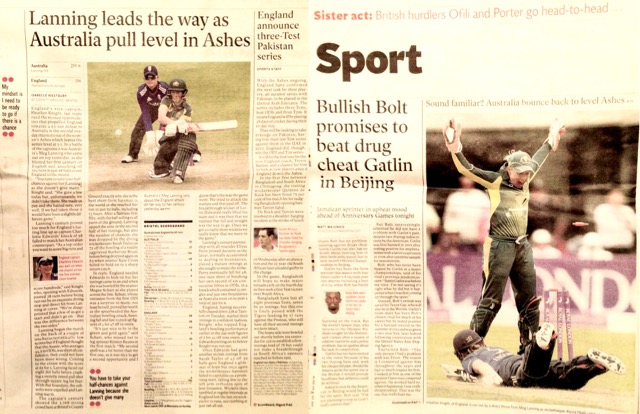 England’s vice-captain, Heather Knight, last night rued the missed opportunities that propelled England towards a 63-run defeat to Australia in the second one­day international of the women’s Ashes which leaves the series level at 1-1.

In a battle of the captains it was Australia’s Meg Lanning who came out on top yesterday, as she blasted her first century on English soil, knocking off 104 runs in just 98 balls to put England to the sword.

“You have to take your half chances against her [Lanning] as she doesn’t give many,” Knight said. “She gave a few today but, unfortunately, we didn’t take them. She made us pay and she batted very, very well. If we had taken those it would have been a slightly different game.”

Lanning’s century proved too much for England’s batting line-up as captain Charlotte Edwards’ knock of 58 failed to match her Australian counterpart. “As a top-order you want to score big runs and score hundreds,” said Knight who, opening with Edwards, posted 38 runs before bing run out by an exquisitve diving stop and direct hit from Lanning at cover. “We’re disappointed that a few of us got a start and didn’t go on – that was the difference between the two sides.”

Lanning began the match on the back of a couple of uncharacteristically low scores but if England thought that Lanning, who averages 44.5 in ODIs, was short of confidence, they could not have been more wrong. Coming to the crease with the score at 65 for 1, Lanning faced out eight dot balls before crashing a sweetly timed pull shot through square leg for four. With that boundary, the cobwebs were dispelled and Lanning was in.

Lanning’s century showed the 3,168-strong crowd at Bristol’s County Ground exactly why she is the best short-form batsman in the world as she reached her ton in just 92 balls, including 13 fours.

After a flawless first fifty, with the ball sailing to all parts of the ground, Lanning upped the ante in the second half of her innings, but also the number of chances; she was dropped by the diving wicket-keeper Sarah Taylor on 72 off the bowling of a visibly aggrieved Katherine Brunt before being dropped again on 83 when seamer Kate Cross failed to hold on to a sharp return catch.

In reply England’s top score of 58 by captain Charlotte Edwards came to an end after she was bowled by the seamer Megan Schutt playing across the line. Schutt, whose omission from the first ODI was a surprise to many, not least herself, proved her worth as she spearheaded the Australian bowling attack, bowling full and fast to pick up figures of 4 for 47 off 10 overs.

“It’s just nice to be in the green and gold again,” said Schutt, who missed out to leg-spinner Kristen Beams in the first match. “My second spell was a lot better than my first one so it was nice to get a second opportunity and I guess that’s the way the game went. We tried to attack the stumps and that paid off. The breakthrough wicket of Lottie [Edwards] really lifted the team and it was then that we realised that full and straight was the way to go. Once we got a couple more wickets we really knew that we were in the game.”

Lanning’s first innings partnership with all-rounder Ellyse Perry proved decisive as the latter, normally accustomed to dealing in boundaries, played a mature innings as she sought to rotate the strike. Perry eventually fell for 48, two runs short of breaking her own record of six consecutive fifties in ODIs, in a knock which contained 34 singles and just two boundaries as Australia went on to post a total of 259 for 6.

England, having successfully chased down 238 at Taunton on Tuesday, started their innings in confident fashion. Heather Knight, who topped England’s bowling performance earlier in the day with figures of 2 for 44 off 9, opened with Edwards to post a healthy opening partnership of 92 before Knight was run-out.

Once Edwards had departed another stylish innings from Sarah Taylor of 43 off 39 balls gave England a glimmer of hope but once again the wicketkeeper-batsman failed to capitalise on a promising start, falling leg before wicket to the left-arm orthodox spin of Jess Jonassen. From then wickets continued to tumble at regular intervals as England lost the last six wickets for 31 runs, succumbing to just 196 all out.

• This article was originally published in The Independent on 24 July 2015. To access the original, please click here.