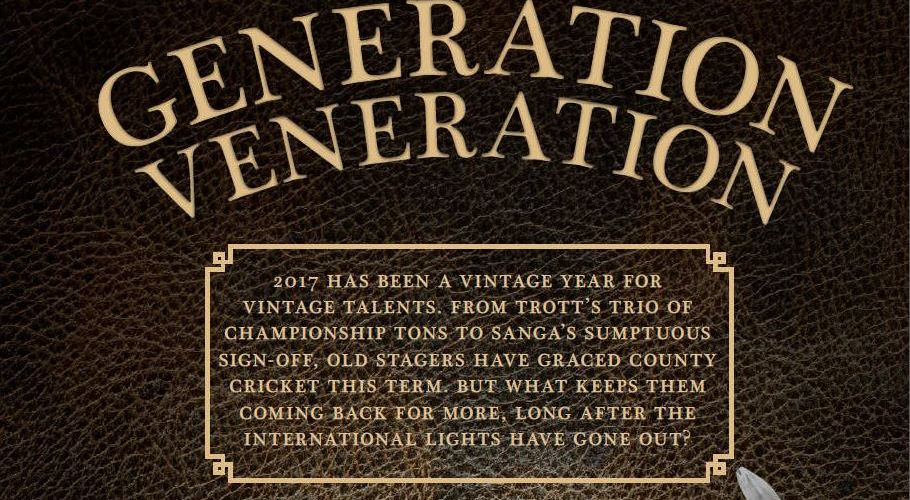 2017 has been a vintage year for vintage talents. From Trott’s trio of Championship tons to Sanga’s sumptuous sign-off, old stagers have graced county cricket this term. But what keeps them coming back for more, long after the international lights have gone out?

County second XI scorecards rarely produce much to excite the average follower. Now and again a young star tipped for great things might pique an interest, or that of a first XI regular thrust back to prove their worth. Examine a handful of Somerset’s second team games however, and one name is instantly recognisable: Marcus Trescothick. Trescothick, 41, has no need to return to this training ground and yet, after 24 seasons in county cricket, Trescothick retains an inherent love of batting – second XI matches present just another opportunity to keep the rhythm going. And he’s by no means alone. For the Bells, Trotts, Battys and Collingwoods of the county game, a mixture of love and duty compels them to keep treading the county boards long after vacating the international stage.

Shivnarine Chanderpaul, whose West Indies career spanned over a decade, is another frequent visitor to this circuit. “The passion and the hunger is still there,” insists Chanderpaul, who made his first-class debut in 1991 and is now in his second spell at Lancashire. “Once it’s there and you are performing, you just want to keep going – you want to show that you still have it.” For someone of Chanderpaul’s calibre milestones become perfunctory. A century earlier this season to salvage a draw against a dominant Yorkshire was his 75th. He had no idea. “The umpire told me,” Chanderpaul explains. “I wasn’t too sure! Whenever you get an opportunity you have to make it count – as a batter that’s what you need to do, for your team and in any situation, you’ve got to bat as long as you can.” The fundamentals, the basics, the art of batting never really change – it’s why Geoffrey Boycott can still offer such insights and criticisms more than 30 years since retiring.

Many of the world’s best batsmen are not the most exciting individuals, but rather creatures of habit; habits which underscore their success. Ask Meg Lanning, the top-ranked woman, how she does it,
and you’ll get the same answer, repeated time and time again: “It’s my job to score runs.” It’s simple, in theory.

Despite the draw to return to the thing that they know and love, it’s not always a straightforward decision. “It’s something I had to think long and hard about,” admits Paul Collingwood, on whether to retire, or return to play for Durham following his last match in an England shirt. “You know full well that international cricket is the pinnacle of your career and that going back into county cricket, the intensity levels, everything that you’ve experienced over that 10-year period in international cricket is…” he pauses. “You’re not going to get that same kind of adrenaline rush again.” Yet Collingwood did return, and there was another factor, a bigger pull. “To me, Durham has always been my home,” he explains. “I’ve been here 22 years now, nearing a quarter of a century, which is pretty ridiculous! So you know, seeing the transformation and seeing the different players come and go – it literally is home.”

Durham, the most northerly first-class county, is also the newest, its first season in the County Championship arriving 71 years after the previous newcomer, Glamorgan. Despite Durham having been crowned county  champions more than any other in the last decade, they now find themselves back where they started, footing the second division and with huge debts to their name. This, according to Collingwood, only strengthened his resolve to return. “I do feel as though we have something special up here, and I know that every county would say the same thing,” he says. “You’re always very proud of your county that you play for, but generally the players who do play here, there is a bond and you know there is a real desire to do it for your area. “We are sports mad up here, we love our football, but cricket is a huge part of the community. You just have to go down to league matches and you see how big cricket is in the North East. It’s a very strong hotbed of young talent.” Collingwood is resilient, and surprisingly upbeat, despite Durham’s widely-covered financial difficulties. The reason is simple – role models. Collingwood knows that he is one, and as long as there is first-class cricket, with professionals to be seen and to be believed, Durham will persevere. “It is a great story, it really is,” insists Collingwood. “It’s a fairy-tale story what has kind of happened up here – building an international ground, giving young people opportunities to be professional sportsmen. To have had that myself, to have had that opportunity and do what I’ve done, I will be forever grateful to Durham. “That’s why it’s so heartbreaking to have had those penalties put on us last year. It’s one of those situations that you never want to get into. But we’ll keep fighting on and keep sticking together like we normally do.”

Jonathan Trott, born and raised in South Africa, might have felt less compelled than Collingwood to return to Warwickshire following his retirement from international cricket. Yet he did. “ I am very fortunate to be at a club like Warwickshire,” he says. “With the people around me that we have, it certainly was never going to be a case of me saying, ‘International cricket, done, thanks for the ride.’” Trott, like Trescothick, is not averse to the odd second XI game either; sometimes it is for his own preparation, but often it is to share his experiences with those rising through the ranks. “They tend to use me as a sort of visual aid, I suppose,” he says. “The younger ones coming through look at how I go about my cricket, not just on the pitch but also with regards to training, attitude, that sort of stuff. Some of them I am twice their age, so it can also be a surreal moment for me as a cricketer. “At that age I didn’t want to make any mistakes. I wanted to be perfect straight away and proceed through the ranks as quickly as possible. I sometimes see them making similar mistakes that I made but now I am able to say, ‘Hey, you actually need to make these mistakes, and that’s okay’. You can see the ones getting a little bit frustrated with themselves and it’s my job to be able to help them and put them on the right path, if you like.”

Sam Hain in particular is a young Warwickshire batsman who appears to have picked up many of Trott’s batting traits, both in his shot selection and the way he sets himself up at the crease. “A few people say that,” Trott says. “I just say, ‘Look, I think you should stop as much as possible from copying me!’ But seriously, we score in similar areas and he is a very, very talented player. “There are of course things, where you do try and take the best things, perhaps the things that you like, from people who are older than you and have perhaps played a bit more international cricket. I think instinctively you must think, ‘Well, if they can do this at international cricket then maybe I should try that as well.’” For Trott, whose battles with stress-related illness are well-documented, there is another element to returning to the county fold. “There are always tough times in cricket, with ups and downs,” he explains. “So to have the sort of stable base that Warwickshire offers, and the people around me, that is very important – certainly for me, but also for any cricketer, they need that. “That’s something that I’ve always had at Warwickshire. Through the good times they are there and through the bad times you know that they are there as well. I am very fortunate – you see a lot of people, not just in cricket, who don’t have that; they feel that they are a little bit stranded perhaps and out on their own on a limb. I can’t speak highly enough about how thankful I am.”

The relative stability of county cricket often also brings with it a flourish of form, and it’s not just the lesser opposition which facilitates this either – for many, it is a burden lifted. Alastair Cook, although not retired, on relinquishing the Test captaincy has scored runs for fun for Essex since, steering his side to the top of the first division. Sangakkara equally so. Such a release is not gender-specific either; Mark Robinson, England women’s head coach, on seeing Beth Morgan bat effortlessly and fluently for Middlesex, presumed she was the next big thing. Alas, her 107 England caps behind her, she had retired from international cricket five years prior. It’s an oft-quoted refrain that spinners mature with age, but there is much to be said for it being batsmen who really make hay in their twilight years. Jack Hobbs managed a Test century at 46 and fond memories of the legendary batsman were recently rekindled when Pakistan’s captain Misbah-ul-Haq managed one too aged 42, becoming the oldest captain to a Test century in the process. By comparison, in the modern era, the oldest person to take a five-wicket haul is Rangana Herath, almost four years Misbah’s junior at the time.

A curious recent phenomenon in the County Championship lends further support to this theory that batting is the most refined of the arts: veteran bowlers, having pounded the pitches up and down the land for years on end, are suddenly thriving with the bat. Nottinghamshire’s Luke Fletcher was unlucky not to get his maiden first-class century earlier this season, while Durham’s Chris Rushworth and Yorkshire’s Jack Brooks have both passed this landmark. Even Somerset’s Jack Leach, once a rabbit in headlights with the willow, managed a first-class fifty. Burly seamers are often adamant that their worth as batsmen is greater than they are given credit for. Perhaps with time they may be proven right.

From David Attenborough’s Planet Earth, to Judi Dench’s ‘M’ in James Bond and Pavarotti’s show- stopping Nessun Dorma, sometimes the best things are those worth waiting for. Some may be dismayed at the absence of the Sangakkaras and Trescothicks from the international stage, but these are a vintage blend, with a better sense of their own fallibility than any other. That they remain in county cricket is a privilege – savour the taste while you still can.

• A version of this article was originally published in the September 2017 print edition of All Out Cricket.